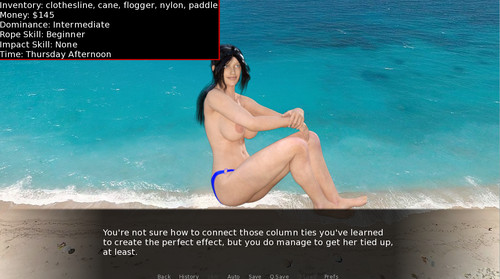 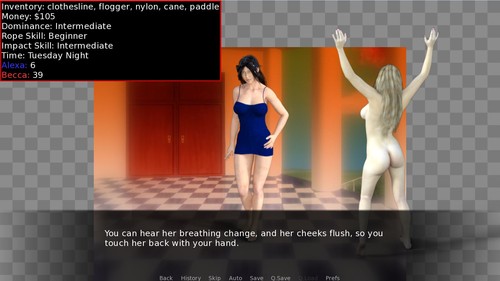 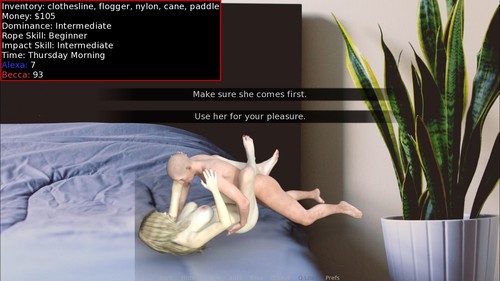 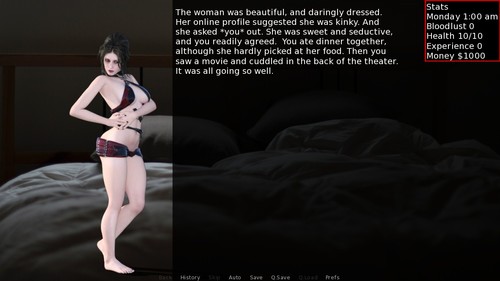 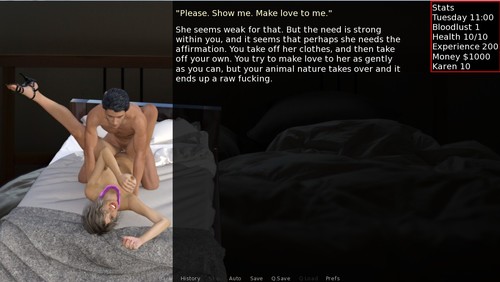 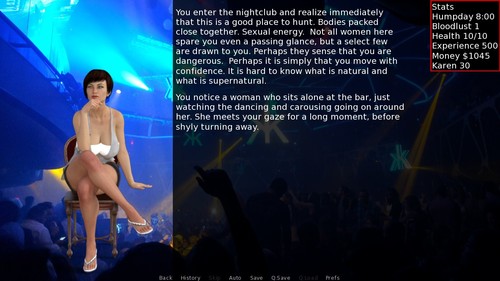 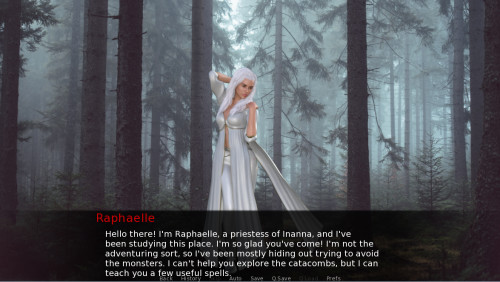 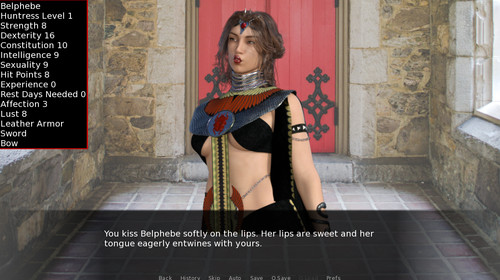 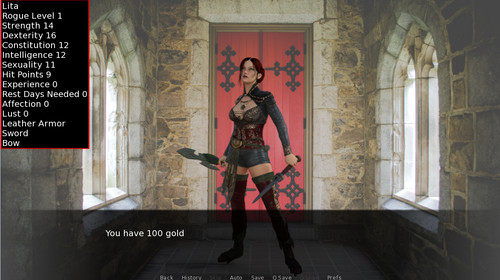 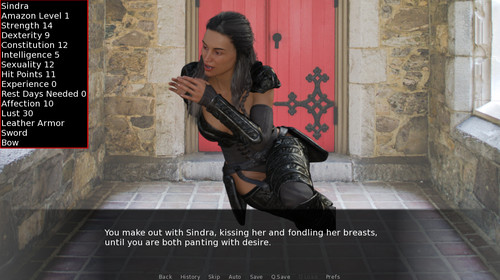 Lucretias Legacy 0.0.8 – Plot:
In Lucretia’s Legacy, you play a vampire who has just been bitten. The game is about pursuing Master/slave relationships with several women, while thwarting the plans of an evil vampire. Fetishes include Dominance, submission, consensual slavery, spanking, flogging, group sex, exhibitionism, harems, and oh, yeah, vampires.

Damsels and Dragons 0.6 – Plot:
In Damsels and Dragons you play a man who is managing a group of female adventurers – 4 at first, but more as time goes on – forming parties, sending them on adventures, getting them magic items, etc.
Over time you will gain the affection of your adventurers, learn to cast spells, and engage in acts of lust and perversion.

Bondage Island is a completed game built on the Ren’py engine. You play a dominant who is just learning his BDSM skills, and can seduce and form Master/slave relationships with any of five lovely submissive ladies on an island resort, or learn skills from them and use them to live happily ever after with your old girlfriend from your home town. It is possible to form relationships with more than one person, but hard to form relationships with all of them. The game is playable in an hour or so, and many people choose to play it multiple times. Making every girl your slave is difficult, although one player did it and sent me a screenshot, so please don’t feel bad if you don’t succeed at that level with everyone. Having to make choices is an intended part of game play.

There are 10 girls to choose from. Lucretia’s Legacy features higher quality models and more complex game play. Versions will be released for $5 patrons first, with public releases approximately a month behind.

Changelog 0.6:
New Content:
New character, the Drow. She’s got a little healing, she’s not bad at range, she’s decent in melee, and she has a Faerie Fire spell that debuffs opponents.
The decadent camp provides a few benefits for those who find it and are on good terms with the decadents.
The Chateau of Dominion provides benefits for those on good terms with the Domina Faction.
The Tomb is now available to players who have slain Bella Morte, containing tougher fights and a greater magical reward than the regular dungeon.
The Rocky Hills are now explorable by parties whose average level is 2 or greater, and includes a Reaver Camp as well as an NPC who has things to offer.
UI Improvements:
Some areas of the combat screen have been made darker to improve visibility.
Combat options no longer shift slightly depending on the number of options available.
Bug Fixes:
After special encounters in the plains characters should no longer see nothing ahead.
Pirate g shot now misses 25 of the time, as originally intended.
Magic items you sell for gold now *actually* add to your gold.
Functionality Changes:
“Studious” trait now causes level gains to be available at less experience, not just to give the character more experience left over.
Angelic, Demonic, and Seraphic dreams now give small faction bonuses and debits when successfully cast.
Once a party reaches an end point in its journey through the plains or the woods, it now works its way back home, rather than wandering endlessly until recalled.
The special cave in the woods now has a fixed location, although adventurers will not automatically spot it until it is discovered. The likelihood of it dropping a random magic item if the ring of bimbofication is in use is no longer 100 .
“Diplomat” trait added – this trait affects reputation gains and losses.
Daily partly random affection is increased if your roster is large.
Added trait “Dominant.” A dominant girl can be made into your head girl, offsetting the aforementioned negatives of a large roster, and additionally making submissives happier. Dominants who are latent submissives lose this trait if they become dominant. Dominants who are not latent submissives are prone to randomly losing the submissive fetish, and are therefore good targets for angelic/seraphic dreams. Dominant girls gain affection when made head girl, and lose significant amounts of affection if replaced; they do not like other girls being head girl, either, so it is usually best to have only one dominant girl on your roster at once.
New recruits’ affection now starts out at 5.*
A player’s “Score” is now displayed on the screen, for those who like that sort of thing.
Giving an item to the temple with a character’s latent fetish on it no longer gets rid of that fetish, but instead decreases sexuality by 1.
Balancing:
Fireball damage increased slightly.
Slightly nerfed Vampire bites healing ability
Most special encounters now cause bandaging to take place; Furthermore, a party is restored to maximum hit points when resting at the village, temple, and some other sites.
Some monsters, especially those found in the woods and plains, have gotten a small boost to hit points.
Priestess beginning spell points has been reduced by 1.*
The cost of Demonic Insight has been cut in half; the cost of Demonic Dreams has been increased by 5, so the net cost of casting both will be close to the same.
Increased Pirate hit points slightly.*
It is now possible to buy Leather Armor for Pirates and Barbarians, increasing their front row survivability.
Reduced the negative effect of Jealousy due to other girls having sex in public, unless the jealous girl is herself an exhibitionist.