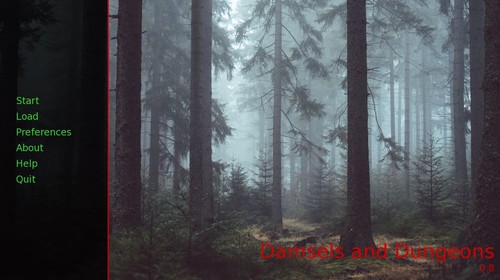 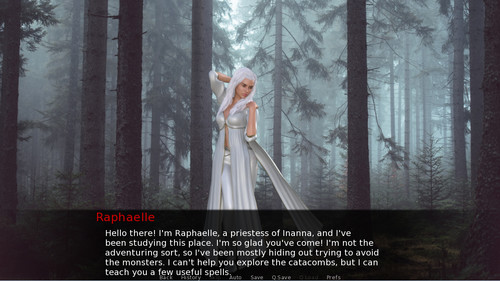 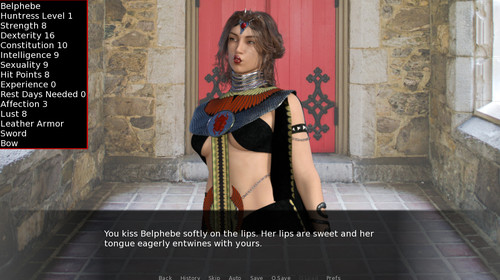 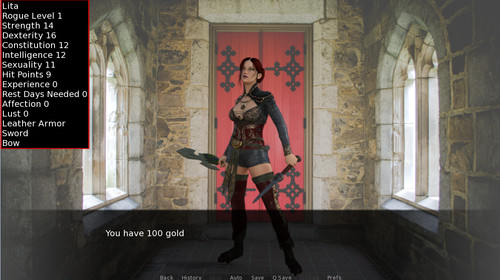 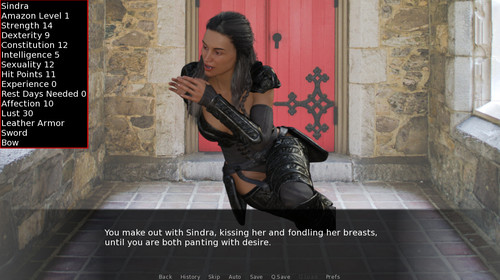 In Damsels and Dragons you play a man who is managing a group of female adventurers – 4 at first, but more as time goes on – forming parties, sending them on adventures, getting them magic items, etc.

Over time you will gain the affection of your adventurers, learn to cast spells, and engage in acts of lust and perversion.

Pregnant models for all the character types.
Entirely new brothel mechanics involve a fluctuating brothel reputation depending on how well your customers are served.
UI Improvements:
There is now a separate screen to check in on the brothel and get a detailed report of what’s going on there.
Bug Fixes:
Game should no longer crash on the birth of a child.
Functionality Changes:
Mothers of children are now willing to adventure and leave their children behind.
Magically, it now only takes 90 days to birth a child.
Girls working in the brothel no longer count against your roster limit (and no longer count toward completion of goals, either.) They can be brought back into your band of adventurers as long as you have room. Since they are not on your roster, many of the things that happen to girls that are on your roster do not happen to them (such as the daily lust increase, coming to you for sex, and collecting a salary.)
Girls returning to adventuring from prostitution require 7 rest days, same as girls coming back from an adventure.
The brothel manager no longer turns tricks herself, but she can teach the girls the Dominant, Greedy, and Promiscuous traits, and the Bisexual fetish, if she has them, all of which make them better or more content at their new job.
If a game is loaded from a previous save, all girls who are on the roster *and* are in the brothel will be removed from the brothel, since characters will no longer be able to do both. Similarly, Brothel managers will be removed from the list of working girls.
The three whores in Orech now cost different amounts, based on the sort of services they provide. They are generally cheaper.
The brothel no longer provides mana, only money.
Pregnant girls will no longer work in the brothel.
Women no longer get the “Mother” trait multiple times.
Women who get pregnant lose the “Fertile” trait.
You can now use girls in the brothel by paying them. If you do something they are only willing to do because they are getting paid, the benefits will be less, but it is still a way to convert money into mana.
The Sanctuary event causing an increase in Sexuality will occur somewhat more often, and more girls will be eligible, *if* the sanctuary has a manager (and even more so if that manager has a sexuality of 16 or greater.